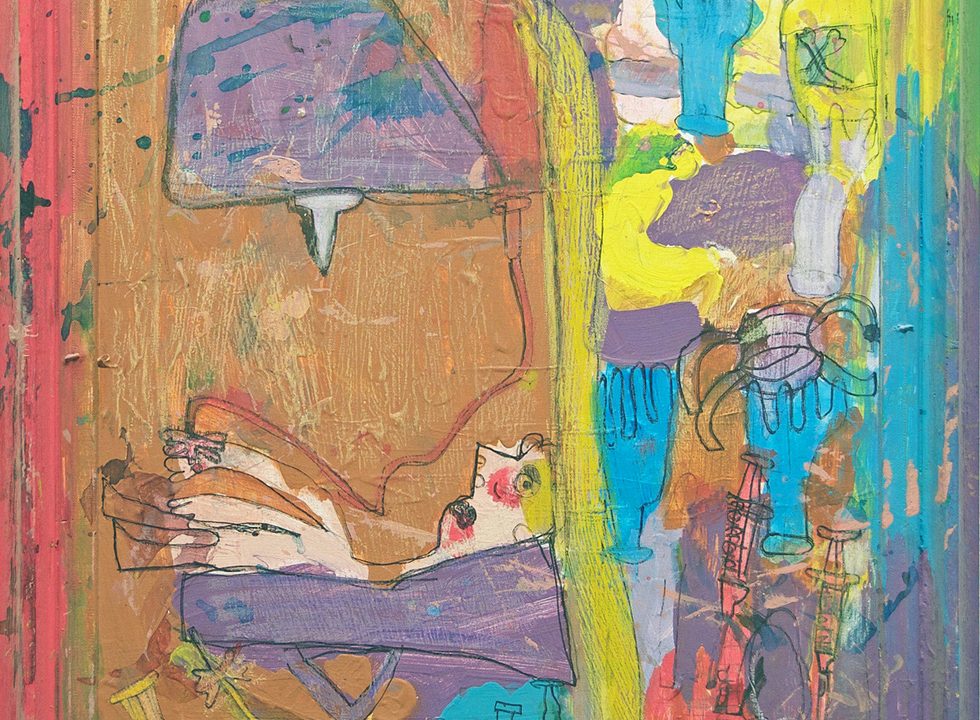 With masking tape and paper, Jeremy Burleson has built a flood of highly detailed medical instruments – hyper-realistic and quasi-workable versions of stethoscopes, ventilators and syringes. Burleson also works out his interest in all things medical on paper, often combining figures with rows of bottles, syringes and balloons. It’s unclear where his obsession stems from, but it’s obvious that his focus on medically related subject matter walks a fine line between fascination and repulsion.

Also, using paper, but rolling it tightly to create a tube of sorts, Burleson crafts lyrical lamp shapes. Vaguely allegorical, the structures are designed to hang from the ceiling, but some are large enough to be placed on the floor. This interest in lamps may have originated during an accident while on a shopping trip to a local warehouse store.

Throughout all of Burleson’s work runs the thread of strange theatricality created by early pop artists like Claes Oldenburg and Red Grooms.

Burleson’s work was included in the traveling exhibition “Create”, co-curated by Larry Rinder and Matthew Higgs, which opened at the Berkeley Art Museum in 2011.

Hailing From Parts Unknown // organized By Curtis Turner May 2019

Where Have All The People Gone? // organized by Amy Miller Village Theatre Art Gallery Danville 2013

San Francisco Chronicle: ‘Create’: Art By The ‘Differently Abled’ At BAM (2011, May)

San Francisco Examiner: Create at the Berkeley Art Museum (2011, May)