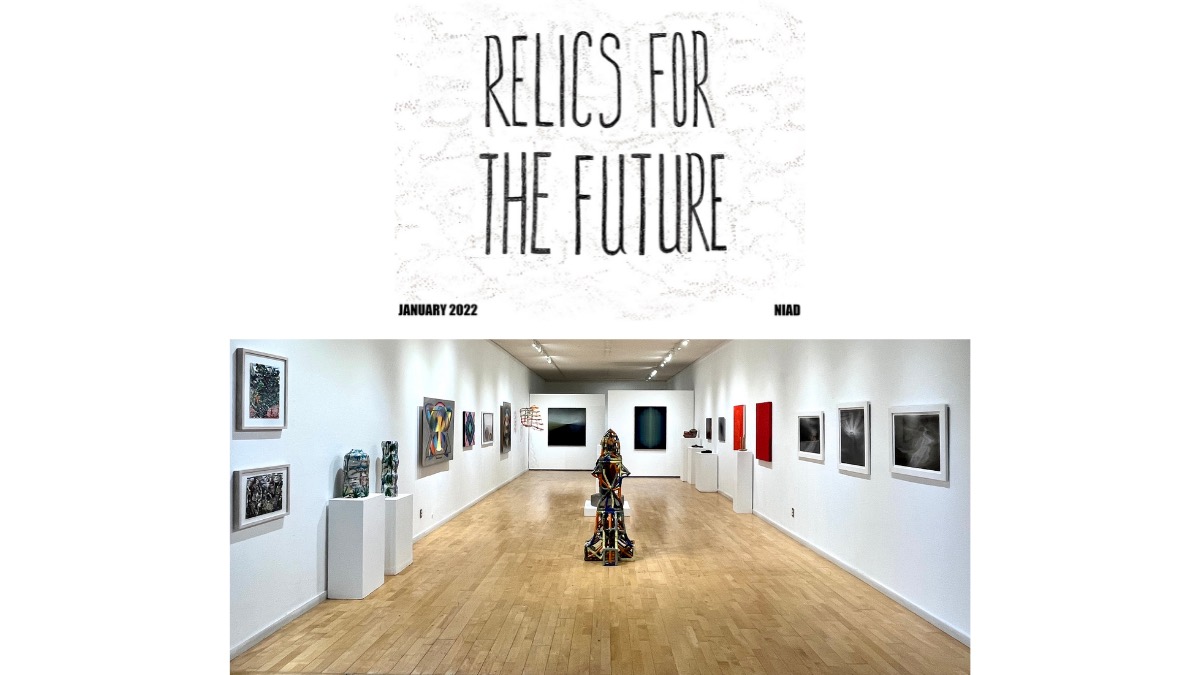 Relics for the Future takes as its point of departure an imagined future in which the art created today is interpreted in an entirely new light.

Will future generations look at works of art of the contemporary moment and assign meaning which was entirely unintended by today’s artists?

Will they see our artwork as antidotes to archaic social networks that in fact isolated us more than connected us?

The artwork of today may be seen as our most successful attempts at communication— odd idols, reliquaries, mandalas, or icons that have transformative power in a society otherwise bereft of such possibility, holding magical properties we currently assign to the art of the ancients.

On our imperiled planet with increasingly scarce resources, which materials will be available, or increasingly unavailable, to artists? What will future art history methodologies reveal about the work we create now?

This show is both a playful and a serious look at the question of art making in our present moment, and the issues that artists may face in a not-very-distant future.

Artists in the Exhibition

Jessica Snow is an artist, professor, and curator based in San Francisco. She earned a BA from UC Davis and a MFA from Mills College, and she also attended the Sorbonne and the Skowhegan School of Painting and Sculpture. Jessica is adjunct professor in the Studio Art and Art History departments at University of San Francisco. She is represented by Pastine Projects in San Francisco and Ideelart in London, and has curated several shows in the Bay Area, most recently ‘Relics for the Future’ for NIAD Art Center in Richmond.

Her current research into art futurology is informed by art history and speculative studies, and incorporates a wide-ranging inquiry into ancient art as well as theories about the art of the future. In 2022, Jessica will be in residence at Fundación Valparaíso in Spain, L’Appartamento Napoli in Italy, and Château Orquevaux in France. While in residence, she’ll be exploring in a new body of work the paradoxical correspondences between the past and future, and the implications these hold for present-day creative activity, recognizing in particular our deep connection to the natural world.

Previous series have been informed by her love of landscape architecture, mid-century architecture, graphic notation, and urban design. Recently Jessica presented ‘Badass Color’, a 2-person show at Le Pavé d’Orsay in Paris. For this show, in June 2019, she and fellow California artist Anya Spielman paid tribute to the city of Paris. In September of last year she participated in the Biennale Internationale d’Art Non Objectif in Pont-de-Claix, France.
Jessica has had several solo shows in the Bay Area, New York, Dallas, and Southern California, including the Riverside Art Museum. She’s been in group shows at the Indianapolis Museum of Contemporary Art, Crocker Art Museum, Monterey Art Museum and the Sonoma Valley Museum of Art. Internationally Jessica has participated in many group shows in the Netherlands, Germany, France, Poland, Thailand, Australia, Uruguay, Argentina, and Ukraine.

Jessica is the recipient of the Cadogan Fellowship Award, the Artadia Award in the Visual Arts Grant, and she was artist-ambassador to Montevideo, Uruguay as part of the US State Department’s American Artists Abroad Program.

RSVP for the Link