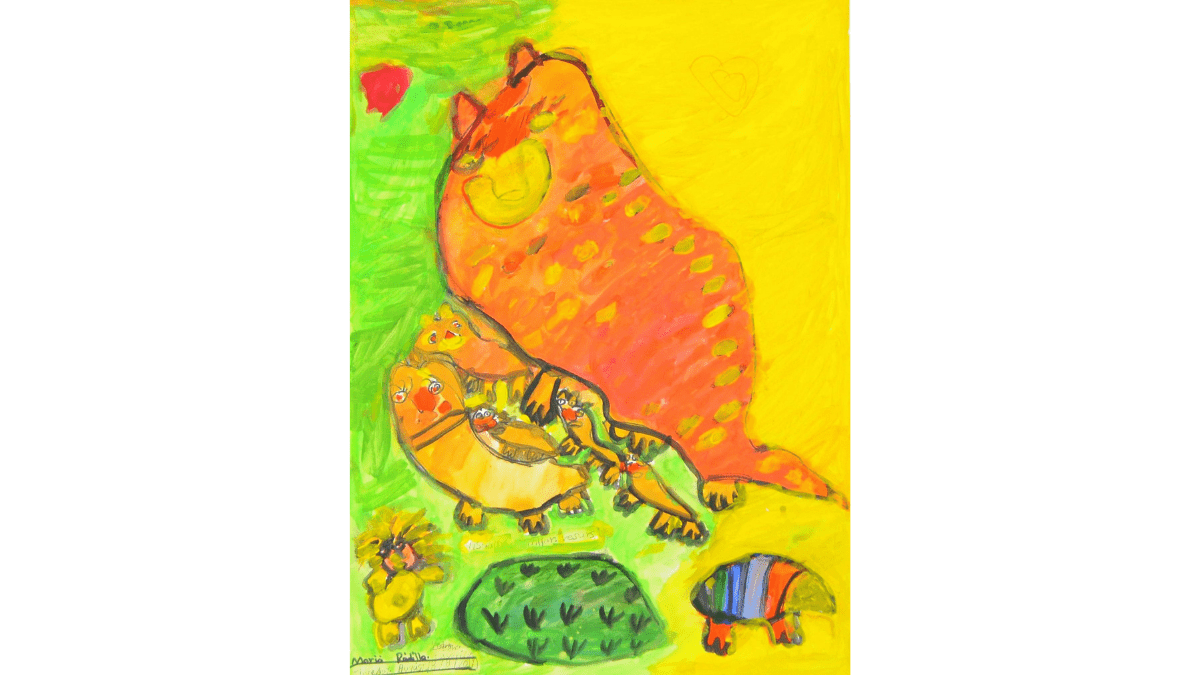 I recently became a dog father of a small two-month-old puppy.  Over the months after his arrival, I have learned so much about myself through him: patience, being present in the moment, not holding people in time and space, and unconditional love.  I had no idea that this was the relationship that would be built between him and I, and it has rocked-my-socks off because of how much of a connection has and continues to develop.

Having worked with NIAD artists at SFMOMA’s Mini Mural Festival in the Summer of 2021, I was excited to do an on-site visit as well as peruse through the amazing online gallery.  My attention immediately grew towards artists artistically rendering images of pets and animals – I felt a universal connection to them both as artists, as well as people who love and communicate with animals and treat them as family.

Christo Oropeza is a San Francisco-born artist working in multiple media, and is one of the YBCA’s 100 former recipients.  Christo began working at the San Francisco Museum of Modern Art in 2005 while still attending SFSU, starting as a coat-check attendant, then an Information Desk attendant, followed later as an Operations Technician through the closure and re-opening of the new Museum. Currently, Christo serves on the Public Engagement team as the Senior Exhibitions Program Associate, working with curators to produce public programs that are related to current and upcoming exhibitions.

Oropeza has helped to design and paint four murals in San Francisco, located at FB Artist in Residence program, at SFMOMA for part of their Koret Education Center Exhibitions, Tip Top Market on Turk street, as well as the back of Mission Pie’s “Old Soil, New Roots” Mural. In the Winter of 2010, Christo and Brian Perrin opened up Incline Gallery in the Mission District. Christo’s role as co-Founder and co-Director continues to expand by facilitating outside curators, international exchanges and partnerships within a community based organization. Christo has both curated and co-curated exhibitions at Incline Gallery for over 10 years.