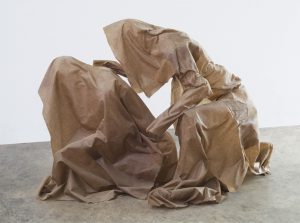 “Robert Morris—the American artist who irreversibly transformed contemporary art as a founding practitioner of Minimalism—has died at age eighty-seven in Kingston, New York, from pneumonia, according to his wife, Lucile Michaels Morris. For over five decades, Morris flouted predictability through his experimentations in sculpture, dance, performances, installations, Land-, and process art.

Born in Kansas City, Missouri, in 1931, Morris studied painting at the Kansas City Art Institute before serving in the Army Corps of Engineers. He then went on to study philosophy at Reed College in the early 1950s. In 1959, Morris moved to New York City with his then-wife Simone Forti, who would become one of contemporary dance’s most innovative figures and with whom he participated in the Judson Dance Theater. He swiftly rose to fame after exhibitions at Green Gallery in 1963 and 1964 that featured humble geometric forms, such as gray plywood cubes and beams that upended viewers’ presumptions about art and caught the attention of fellow Minimalist artist and critic Donald Judd….